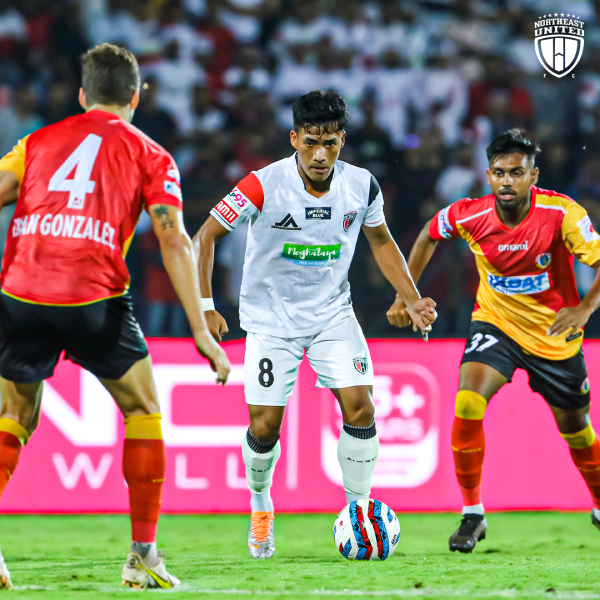 03 Saturday 2022
NEUFC desperately needed a win to get their season up and running after a nightmarish start to the campaign but were condemned to yet another defeat against East Bengal FC at the Hero ISL at its home ground, Indira Gandhi stadium in Guwahati on October 20, 2022. As a result, the team from the North Eastern part of India remain rooted to the foot of the table. Goals from Cleiton Silva, Charis Kyriakou and Jordan O’Doherty helped East Bengal beat NorthEast United FC 3-1 at the Indira Gandhi Athletic Stadium in Guwahati. EBFC were on the offensive right from kick-off. This early pressure was then converted into a goal in the 11th minute with a cool finish by Cleiton Silva. NEUFC showed glimpses of attacking intent in the first 45 minutes and could have even equalized just before the whistle as Matt Derbyshire hit the crossbar. EBFC started the second half just as they had started the first half and within 7 minutes of the resumption, Charis Kyriakou thumped home from outside the box to double the advantage. NEUFC were always chasing the game and with more and more players pushed forward, they left themselves open to a counter. It did happen in the 84th minute, Jordan O’Doherty sealed the game with an easy finish. The attacking play was potent from EBFC but their defense was equally good although they had a slight lapse in added time as Matt Derbyshire scored NEUFC’s first goal of the campaign.