Kerala Blasters Edged Past NorthEast United in a Close Encounter 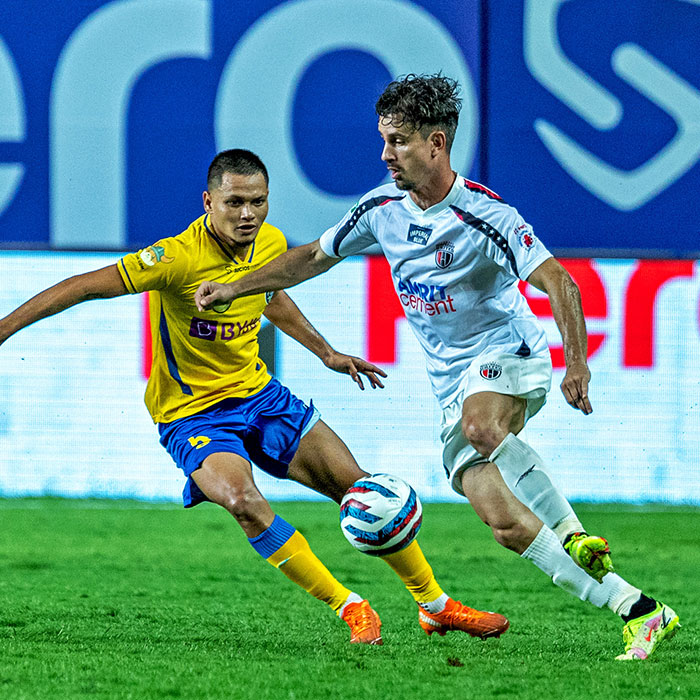 14 Monday 2022
NorthEast United FC suffered a narrow 2-1 defeat against Kerala Blasters FC in the match 81 of the Hero ISL. The match was held at the Tilak Maidan Stadium on the 4th of February. It was Pereyra Diaz for the hosts who opened the scoring at the 62nd minute and Alvaro Vazquez doubled the lead at the 82nd minute. Though Mohamed Irshad was able to pull one goal back for the Highlanders right at the end, it was a bit too late for the visitors to make a comeback. Coach Khalid Jamil made 3 changes in the starting line-up as Hernan was back after serving his suspension and replaced Patrick Flottmann. Whereas Mashoor replaced Sehnaj and Joe replaced Lakra at the back, midfielder Imran Khan made way for Pragyan Gogoi. Both the sides started the game having evenly shared possession but the hosts had the first chance of the game but Sahal’s cross from the right didn’t bother Subhasish at goal. On the other hand, it was VP Suhair who had the Highlanders’ first chance on goal at the 9th minute, but the forward’s attempt went above the bar. The hosts had their first corner of the game at the 12th minute as Vazquez’s long effort took a deflection off Zakaria but the corner was dealt well with ease by the NorthEast defence. NorthEast were able to create another chance, this time from a counter at the 16th minute. Hernan’s long ball was perfect for Marcelinho down the left wing but his cross turned out a bit heavy for Suhair. On the other end, the Highlanders conceded two back to back corners but the Blasters weren’t able to capitalize. After some good build-up play, NorthEast won the first corner of the game at the 26th minute but the effort from Marcelinho was cleared with ease by the Kerala defence and the following throw-in resulted in another corner which didn’t yield any effort on target as well. At the 28th minute, Marcelinho, after a couple of quick exchanges with Hernan found himself with space to shoot but he too wasn’t able to register his shot on target. The Highlanders won their second corner at the 36th minute but Hernan’s curler from the corner was just whiskers away from the post. A few half chances on both ends before the referee blew his whistle for halftime as the score remained goalless. The Highlanders started the second half on a brighter note as right in the second minute a quick combination between Suhair and Marcelinho saw the Brazilian draw a foul and win a freekick from just outside the box but Hernan’s right-footed effort just went past the post. The visitors won their next corner at the 53rd minute but the near post attempt was dealt well by the hosts. It was Kerala Blasters who were able to break the dreadlock through Pereyra Diaz at the 62nd minute. Khabra’s header from the right was headed with venom by the forward to give Kerala the lead. It was at the 64th-minute mark that coach Khalid made the first two changes; Imran Khan was brought in to replace Pragyan and Joe made way for Lakra. With the injection of fresh legs, NorthEast won a corner at the 69th minute but the Kerala defence dealt well with the danger. The hosts were down to 10 men at the 71st minute as Ayush Adhikari was sent off for his second foul on Hernan. It was at the 80th minute when Deshorn Brown made his way onto the pitch replacing Marco Sahanek after missing a few matches owing to his injury. Kerala Blasters were able to double their lead soon after through Alvaro Vazquez who capitalised on a missed pass from Mashoor and put his long shot past Subhasish to double the hosts’ lead. NorthEast, however, kept pressing and were able to find a goal back right at the additional minutes of the game through Mohamed Irshad but the Highlanders left it too late to make a comeback and the match ended 2-1 in favour of the Blasters. NorthEast United will now face Kolkata Giant ATK Mohun Bagan on the 12th of February at the PJN Stadium in Fatorda.