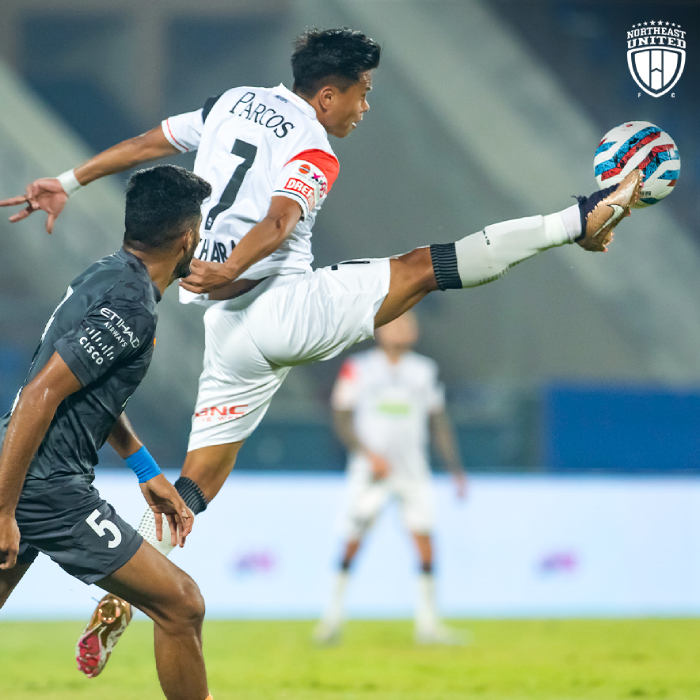 03 Saturday 2022
No amount hard work could help NorthEast United FC overcome hard luck as Mumbai City FC registered a 1-3 victory at the Indira Gandhi Athletic Stadium in Guwahati on November 25, 2022. It was the goals from Ahmed Jahouh, Bipin Singh, and Jorge Pereyra Diaz for the Islanders to trump the resilience of the Highlanders. In the initial exchanges, although the Highlanders showed some positive signs, Mumbai soon started controlling the proceedings. But Marco Balbul's side looked unfazed by their opponent's dominance. However, in the eighth minute, all their resilience went in vain owing to a shambolic refereeing decision. Greg Stewart was brought down outside the opposition box by Rochharzela, yet the referee pointed to the spot to award Mumbai a penalty. The vocal protests from the home side couldn't stop Ahmed Jahouh from converting the penalty and putting Mumbai ahead. But seven minutes later, Lady Luck smiled at NEUFC as Mehtab Singh cheaply gave the ball away to Romain Philippoteaux in Mumbai's half. The Frenchman neatly found Parthib Gogoi, who showed great composure for his age and converted the gilt-edge opportunity. NorthEast had restored parity but Des Buckingham's men displayed the gulf in class between the two teams soon enough. In the 28th minute, a graceful Stewart made a run down the right flank and found Bipin Singh unmarked at the back post with a looping cross. The latter made no mistake as he calmly headed the ball past a helpless Mirshad Michu. Mumbai were back on top and weren't planning to let go of the lead. Since then, the Highlanders rarely had any opportunity to trouble Mumbai custodian Phurba Lachenpa. The visitors went into the half-time break with a narrow one-goal lead. It was a blistering start from Mumbai City FC in the second half as even before the home side could gather themselves, Jorge Pereyra Diaz doubled the lead. Bipin Singh caught NorthEast United FC on the break and got into the box from the left flank. Although his left-footed attempt was saved by Mirshad Michu, the rebound kindly fell for Jorge Diaz, who tapped it home. With the scoreline at 3-1, head coach Marco Balbul brought on a couple of changes. The substitutions didn't specifically inspire NorthEast United FC, but they were close on a couple of occasions. Mumbai expertly controlled the game and didn't allow NEUFC to get back into the game at any time. In the 76th minute, after an elaborate build-up, Greg Stewart found himself inside the opposition box with the possession of the ball. He set himself up to thump the ball into the top corner but his effort rattled into the crossbar. As the referee blew the final whistle, Mumbai temporarily jumped to the top of the table with three points. NorthEast United, on the other hand, are glued to the bottom of the table with seven consecutive losses.