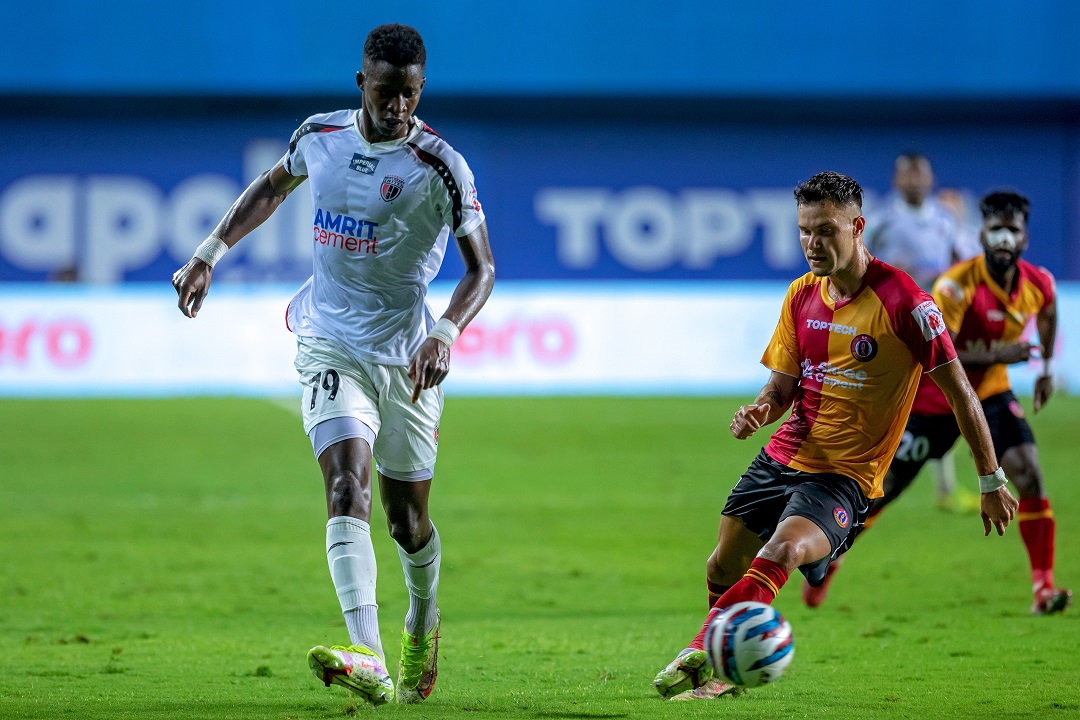 04 Friday 2022
NorthEast United ended the Hero ISL season 2021-22 with a 1-1 draw against SC East Bengal at the Tilak Maidan Stadium in Goa. The Highlanders made two changes in the final game of the season as both Mashoor Shereef and Hernan Santana had to sit out due to suspensions and were replaced by Patrick Flottmann and VP Suhair. It was the home side who started the proceedings and both the teams shared possession in the initial minutes of the game. NorthEast had the first chance of the game at the 4th minute through a corner but after a couple of half-chances, the East Bengal defence were able to clear the ball away. A few minutes later, Mirshad was caught in action as a long effort from Hnamte was parried away to safety by the keeper making his first save of the game. The first 45 minutes of the game didn’t see much action as both the teams struggled to penetrate the opposition’s defence and the referee added on 3 additional minutes before half-time. It was in those additional minutes when the Highlanders were able to break the shackle and score the opening goal of the game. VP Suhair was free down the right-wing and his curler from outside the box beat the keeper to hit the post the rebound felt nicely for Marco Sahanek to put it in the open net to score his first goal for NorthEast United and with the goal, the Highlanders went into the break with a 0-1 lead. Right from the beginning of the second half, the Highlanders were on the attack in search of the second goal and kept pressing the SC East Bengal defence. But it was against the run of play when the hosts were awarded a penalty at the 55th minute and Antonio Perosevic converted it from the spot to equalise. The remaining minutes of the game saw both the sides share possession in search of the winning goal but each team’s defence were at par to keep the scoreline at 1-1 by the time the referee blew his whistle. With the result, the Highlanders will finish the season at the 10th place with 14 points.