Sylla's 2nd goal ensures a crucial point for the Highlanders 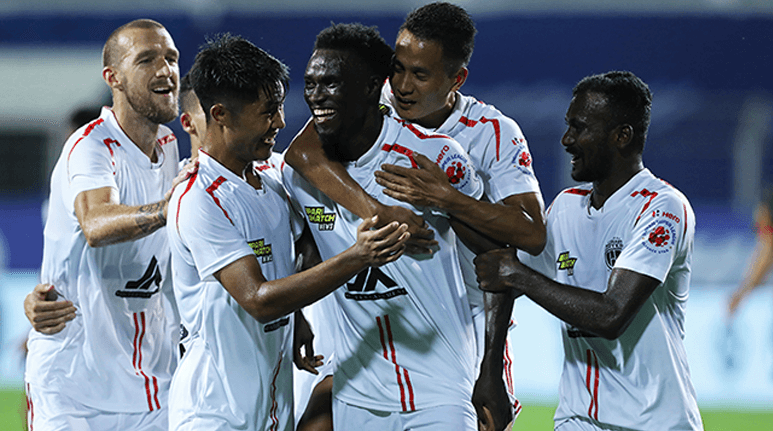 30 November 2020 | NorthEast United Media
A first half penalty, subsequently converted by Idrissa Sylla and a dogged defensive performance in the 2nd half ensured the Highlanders returned from the Fatorda with an important point to maintain their unbeaten start and a spot in the top 4 of the Hero ISL.
Provat Lakra, Britto PM, Idrissa Sylla were handed their first starts of the season while Rempuia Fanai also returned to the starting XI after a niggle kept Federico Gallego out of the matchday squad. Luis Machado returned to the left wing, replacing Gallego as the 5th foreigner in the squad. Youngster Apuia Ralte was handed the captain’s armband on the night, making him the youngest ever captain to lead a side in ISL history. Mizo compatriot Rochharzela was included in the matchday squad for the first time this season.
The match saw a lively start as both sides looked to seize the initiative early on. For the Highlanders, Idrissa Sylla gave the opposition defenders quite a lot to think about, winning a lot of the aerial duels. After heading Britto’s cross over the bar early in the half, Idrissa was brought down in the box in the 40th minute and converted the resulting penalty, giving the Highlanders the lead. The home side equalized 3 minutes later through Igor Angulo, sending both teams into the break level on the scoresheet.
Coach Gerard made 2 changes at the break, bringing on Ashutosh Mehta for Provat Lakra and Keeper Gurmeet Singh in for Subhasish, who left the pitch on a precautionary measure. The home side dominated ball possession in the 2nd half launching wave after wave of attacks only to be foiled each time by a resolute Highlanders defence. Midway into the half, Rochharzela was given his HERO ISL debut, with Kwessi Appiah joining him soon after in a bid to find a late winner. All three were involved in a great chance in the 85th minute where Ninthoi broke down the right wing and his cut back failed to find Appiah. The cleared ball found Machado who found Rochharzela in a great position inside the box but the winger’s shot was blocked by the Goan defence. Even with 5 long minutes added on after the end of regulation time, both sides had to end the night with the scores level and a point a piece.
Skipper Apuia Ralte earned the Player of the Match Award for another phenomenal performance in the center of the pitch, making it a night to remember for the youngster who earlier scripted history by becoming the youngest skipper in the league’s history.
"I am satisfied with the work-rate of all the players. They showed commitment, and it is clear that we are improving in every game. We wanted to win, of course, we came here with that desire, mentality and the hope that we would do everything it takes to win", said Coach Gerard on the performance put in by the boys. The gaffer reserved special praise for captain Apuia Ralte, saying “I have already spoken about him so many times because it is amazing to have one of the most talented Indian players with us. He has been a part of the U19 national team and I am sure he will soon be a part of the senior team. Giving him the captaincy for the game means he has my full trust and the team needs him.”