Spoils shared at the Bambolim as Highlanders draw Odisha 2-2 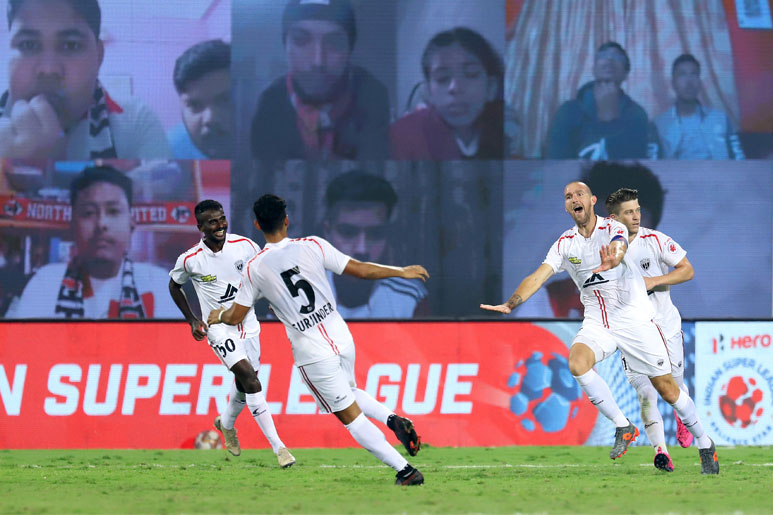 22nd December 2020 | NorthEast United Media
A thrilling encounter at the Bambolim stadium saw the spoils being shared between the Highlanders and the Kalinga Warriors. The Highlanders will probably feel a little undone with that result considering a win would have really cemented a place in the top 4 before going into the break.
Coach Gerard Nus made a slew of changes to the line-up going into the match with Federico Gallego, Luis Machado, Rempuia Fanai and Britto starting ahead of Khassa Camara, Ninthoi, Idrissa Sylla and Charra who didn’t make it to the matchday squad due to a niggle. Kwesi Appiah started as the lone striker up front and almost got into the scoresheet early on in the game from a beautiful lob from Federico Gallego. His strike was however parried away by the inform Arshdeep, who has been one of Odisha’s bright spots this season.
Gallego for the first time in months, looked the player he was when he first landed in India, being instrumental in every attack the Highlanders built and dictating the tempo of the game from the midfield. As several chances went begging, Mauricio gave Odisha the lead against the run of play. Going down at the 30 minute mark, galvanised the highlanders to push for the equalizer and they found one right at the stroke of half-time, when Captain Lambot headed one home from a beautiful cross by Ashutosh Mehta. The latter making his 50th Hero ISL appearance was in fine touch reserving his best for the special occasion.
Coach Gerard replaced Britto at the break, bringing in Ninthoi for a fresh injection of pace as the Highlanders looked for a winner. 10 minutes into the 2nd half, The gaffer subbed Gallego for Idrissa Sylla looking to add more firepower in the final third and soon, a penalty was awarded to the Highlanders after Appiah was brought down in the box by Arshdeep. The Ghanaian converted the penalty to give the Highlanders a much deserved lead only for the home team to hit back five minutes later through an exquisite curler from Alexander. Both teams threw everything they could in the dying minutes but the winner was just nowhere to be found on the night.
Speaking to the media from the sidelines after the game, Coach Gerard said “I think we deserve the three points. We had a great performance with the ball. We created many chances. We deserved to score more compared to the other games and the thing is this game is so competitive and once you don't pay attention then the teams will punish, no matter who you're playing against.”
The Highlanders will now go into a much needed break of 10 days before returning in 2021 to face the Defending Champions ATK Mohun Bagan.