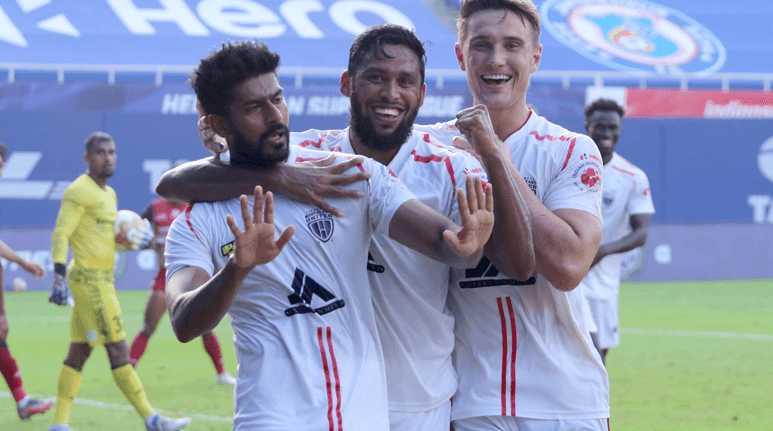 17 January 2021 | NorthEast United Media
A Federico Gallego inspired Highlanders ended a dismal string of results with an assured performance against the Red Miners to mark their first win of 2021.
With Khalid Jamil back in the dugout, the Highlanders looked a different side right from the start. With the likes of Camara and Gallego controlling the midfield and Machado looking threatening up front, the Highlanders began the game as the better side looking more likely to disturb the scorers and after a couple of chances went begging, Ashutosh Mehta headed home from an inch perfect corner kick by Gallego. It was poetic that the Mumbai boy, who Coach Khalid brought up the ranks, was the one who rose up to the occasion and scored his first goal for the club. The Highlanders went on to hold their advantage into the break.
Straight into the second half, Coach Khalid replaced Idrissa Sylla with debutant Deshorn Brown in a move that may have very well earned us the win. Brown looked right at home at the front and within 15 minutes scored from another Federico Gallego assist to fire the Highlanders into a 2-0 lead. The Red Miners went looking for a way back into the game but a defensive masterclass led by Dylan Fox in the absence helped see out the rest of the game barring the 89th minute goal from Hartley, which should have been ruled out for a handball.
With 3 points secured, the Highlanders now move upto 5th in the table and will now look to continue the positive vibe into their next run of fixtures. A 9 day gap further helps Coaches Khalid and Alison to imprint their philosophy into the team and a chance for some of the players to recover from knocks and niggles.
Next on the road, the Highlanders will face ATK Mohun Bagan on the 26th of January.