Red Hot Highlanders do the double against Mumbai City FC 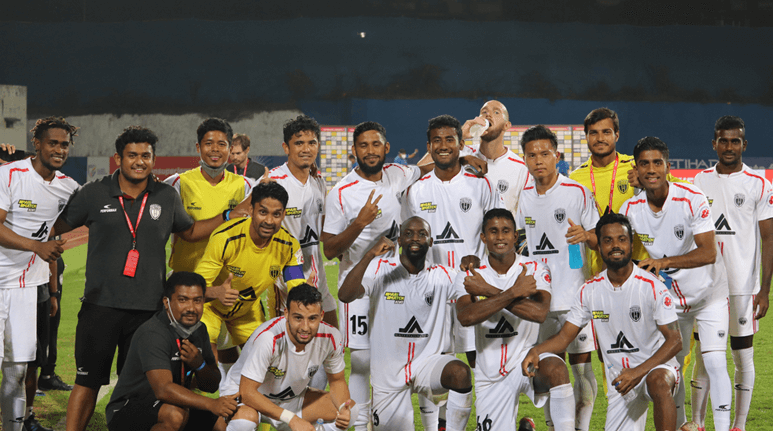 30 January 2021 | NorthEast United Media
A Deshorn Brown brace within the first 10 minutes was enough for the Highlanders to see out the Islanders in a spirited contest at the Bambolim Stadium last night.
The Highlanders went into the game in form, picking up maximum points in their last 2 outings but the league leaders posed a different challenge altogether. Against the predictions by the pundits though, the Highlanders opened the game in an unbelievable fashion taking the lead in the 6th Minute through Deshorn's impeccable volley off a fine Nim Dorjee cross. 3 minutes later, Brown found the net again as Gallego's corner ricocheted off Machado to land at Brown's feet. The red hot Jamaican could have had a 25 minute hattrick but he turned Lakra's sublime pass wide off the target. Into the water break at the 30 minute mark with a 2-0 lead, the Highlanders shored up things at the back with stand in full backs Lakra and Nim Dorjee operating beautifully whilst the centre back pairing of Lambot and Mashoor dealing with all threats efficiently. Camara and Apuia Ralte continued to break down attacks and Gallego and Machado combined to threaten every time they had an opportunity to go forward.
The second half saw Mumbai dominate a lot of the ball as the Highlanders preferred to hit on the breaks and preserve the lead. Chances were still on offer at both ends though and the Highlanders never looked out of depth against their much fancied opponents. Coach Khalid rang in the changes late on introducing Charra and Sylla to replace VP Suhair and Deshorn Brown. Late in the game, Le Fondre found the back of the net from close range giving the Highlanders a nervy final few minutes to deal with but the Highlanders, albeit a spectacular save from Subhashish, managed to see the game out and complete an impressive hattrick of wins.
Deshorn Brown was adjudged the Man of the Match for leading the Highlanders to their first ever 3 wins in a row streak. Speaking to the media after the game, Coach Khalid attributed to the win to the spirit of the players, who according to him have been working tirelessly to deliver the results.
The Highlanders will next take on the Gaurs on the 4th of February at the Tilak Maidan.