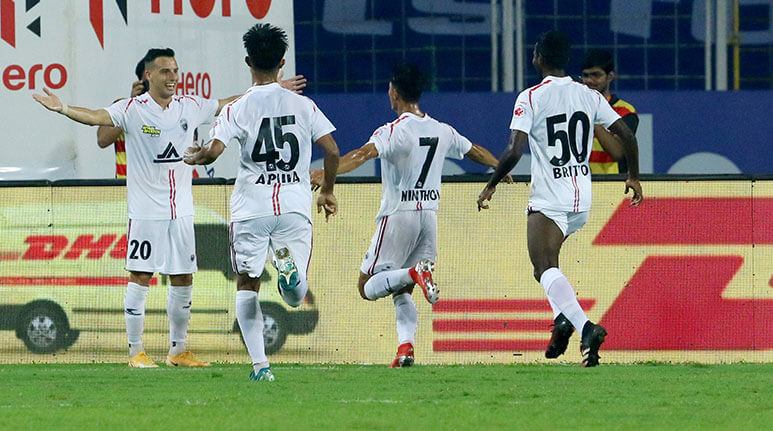 8th December 2020 | NorthEast United Media
A brace from winger Luis Machado in both halves helped the Highlanders hold BFC to a draw at the Fatorda Stadium last night as both sides remained unbeaten in the Hero ISL. A match that saw several swings through the 90 minutes, ended with both sides having to be content with the point which one would agree was a fair reflection of how the match went.
The Highlanders began the match in incredible fashion, scoring as early as the 4th minute when Rochharzela’s shot deflected off Machado to open the scoring on the night. Bengaluru hit back via Juanan 8 minutes later to equalize for the home side. Both sides continued to make forays into the attacking third, but the scoring was all level at the break.
Coach Gerard rang in the changes almost immediately in the second half. Charra was replaced by Ninthoi while Apuia replaced Fanai as the Highlanders looked for a winner which could send them to the top of the league. Both keepers were called into action at this period of the game, with Gurpreet Singh Sandhu palming off a close range Appiah header to deny us while Gurmeet made a couple of unbelievable saves to keep us in the contest. Britto and Idrissa Sylla were introduced with 30 minutes to go, as Coach Gerard opted for fresh legs in attack for the final quarter of the game. It was Bengaluru though who would go on to take the lead with Udanta capitalising on a misunderstanding at the back and sending the Blues 2-1 up in the 70th. However, 8 minutes later the Highlanders equalised yet again as Luis Machado’s well executed finish beat Gurpreet to earn him his second on the night. With 10 minutes to go both sides went looking for the winner but the defences stood tall and the game ended in a deadlock.
For his excellent performance on the night, Luis Machado was adjudged the Player of the Match. He credited his individual and the team performance to the hard work the team was putting in at the training ground. Speaking to the media after the game Coach Gerard said, “I am happy with a lot of the things that we did today. There has been a massive effort from the players. The last game was three days ago. We try to rotate the players as much as we can because these players deserve it. We wanted to get the three points but everything can change against a side like Bengaluru. We knew it was going to be very tough but I take this result as a positive one.”
The Highlanders will next take on Chennaiyin FC on Sunday.