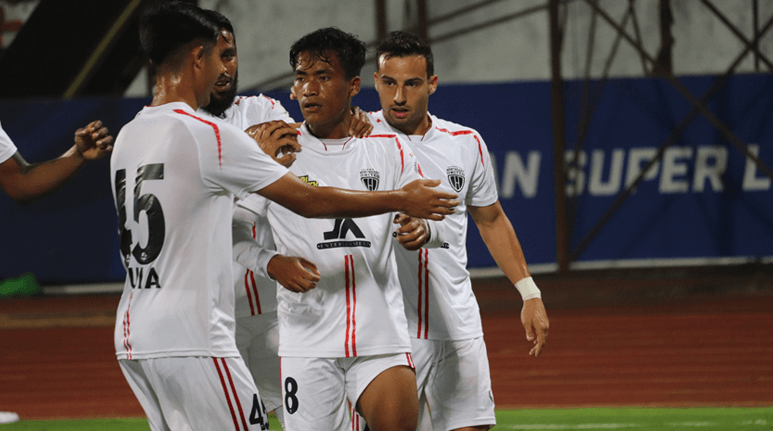 18 February 2021 | NorthEast United Media
Matches against Chennaiyin FC bring with them the promise of goals, plenty of drama and encounters that are often talked about for years to come. While the earlier encounter this season ended 0-0 in an anticlimax, Chennaiyin vs NEUFC didn't disappoint the time around, with the score, ending 3-3 after a gruelling night at the Bambolim.
The Highlanders went into the game without the services of maestro Federico Gallego who had to sit this one out with a niggle. Industrious Manipuri playmaker Imran Khan joined the lineup instead. Chennaiyin started the game the better side, attacking at every opportunity and in the 8th minute, Chhangte opened the scoring on the night allowing the Blues to take the early advantage. Down a goal for the first time since taking over the reins this season, Coach Khalid urged the boys on to fight on. Six minutes later, midfielder Imran Khan found the back of the net with a diving header to mark his first ever start for the Highlanders with an incredible goal. The midfielder seemed to be at ease at the middle of the park despite filling the large void left in Federico Gallego's absence and emerges as another fantastic option for the think thank to utilise in the games ahead. At the stroke of half time, Khassa Camara's clearance from our box found Deshorn Brown in space, who ran through on goal and finished with class to give us a deserving lead to take into the break.
Whilst the second half began with VP Suhair, almost doubling our advantage the threat of Chennaiyin remained on the break and with Chhangte being brought down in the box, the Blues equalised via the subsequent Lanzarote penalty. With the scores now 2-2 and about 40 minutes to play, both sides had the opportunity to go for all 3 points. Just a minute later, Luis Machado's misplaced pass fell kindly for Chhangte who ran through on goal to give Chennaiyin the upper hand. The Highlanders were up against it at this point and needed some intervention to stem the dangerous Chhangte on the left. Coach Khalid was quick to ring in the changes, replacing Ashutosh with Nim, Benjamin Lambot with Mashoor and then Imran Khan with Sylla. The introduction of Nim effectively neutralised Chhangte’s threat and allowed the Highlanders to regain lost control of the game in search for an equaliser. Idrissa Sylla almost equalised, if not for yet another super save from Vishal, who had a fantastic game between the sticks. With 6 minutes added on at the end of regulation time, the Highlanders were staring at their first loss in 8 games. In the 94th, Sylla’s determination to win an aerial duel with Kaith forced the Goalkeeper into committing a foul inside the box allowing the Highlanders a big chance back into the game and perhaps the playoff race. Luis Machado converted the resulting penalty to end the night on a bright note for the Highlanders. With a point from the game the Highlanders are still in control of their playoff dream with 2 wins of the next 2 games guaranteeing a place in the Top 4.
The Highlanders will next face off against Kolkata Giants East Bengal on the 23rd of Feb.