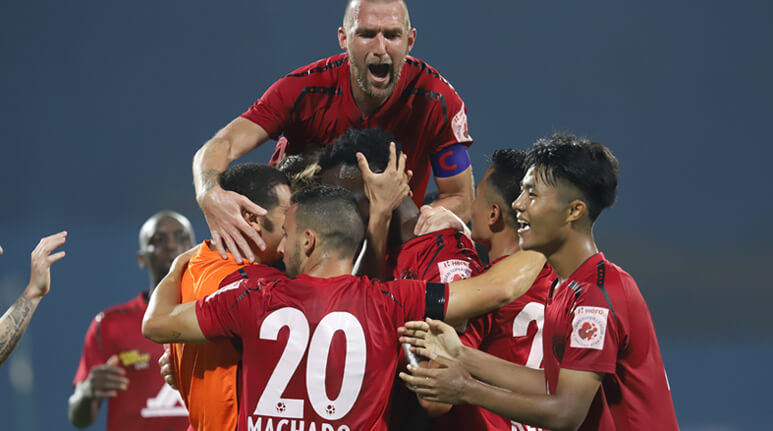 26th November 2020 | NorthEast United Media
An opening goal under 5 minutes, 3 penalties and a 90th Minute Idrissa Sylla equalizer marked our 100th HERO ISL match at the Bambolim Stadium in what was our first away assignment of the season, against Kerala Blasters. Federico Gallego came in for Luis Machado, while Rakesh Pradhan replaced Rempuia Fanai in the starting line-up. Benjamin Lambot led the side out for the first time in his Hero ISL career.
The hosts came into the match after an opening day loss and a point to prove, as they got the ball rolling in the first 5 minutes with midfielder Sergio Cidoncha scoring from a set piece. Chasing the game right from the start, the Highlanders started to get into the game especially after the first drinks break, but were pegged back further when Gary Hooper converted a penalty to give the Blasters a strong 2-0 lead.
Faced with a daunting 2 goal deficit, Gerard Nus was quick to ring in the changes as Britto replaced Rakesh at the break, who had earlier started at the left-wing position. The boys began the half with much more about themselves and soon a corner swung in by Gallego found Appiah in the box and the Ghanaian converted from close range. With 52 minutes on the clock the Highlanders started to dictate terms as the defensive duo of Fox and Lambot started advancing through the middle, whilst the midfield duo Camara and Apuia kept the Kerala mids from having a say in the match. The Highlanders soon earned a penalty after Ninthoi was brought down in the box. However, Appiah’s strike hit the upper side of the top left bar, before going over leaving the Ghanaian ruing what could have proven to be a costly miss later in the night. With 20 minutes to go Coach Gerard Nus introduced Idrissa Sylla and Luis Machado for Appiah and Gallego respectively. Combining with Gurjinder and Britto, a fresh Machado started dictating play from the left and occasionally switching to the right as well. What was really interesting to see was the advanced runs Lambot and Fox were making into the opposition box and the deep balls being pinged in by left back Gurjinder Singh, the last of which found striker Idrissa Sylla in the box. Given a chance to get the Highlanders back in the game, the Guinean converted the chance to spark off wild celebrations in the Highlanders bench.
The full time whistle saw several players on the floor having given their all during the 90 minutes and that performance on our 100th Hero ISL match will be one to be proud of. Dylan Fox walked home with the Hero of the Match Award for yet another spirited display that saw him earn heaps of praises from the fans and the pundits. "I think we showed today that we can adapt to the situation. We are a team that can come back into the game even if the situation is not in our favour. We showed character, we showed how good we can defend but we also definitely showed how we can keep possession, execute combinations. We had many more chances than them, we had a lot of possession. So proud about the performance tonight," Gerard Nus said in the post-match interview.