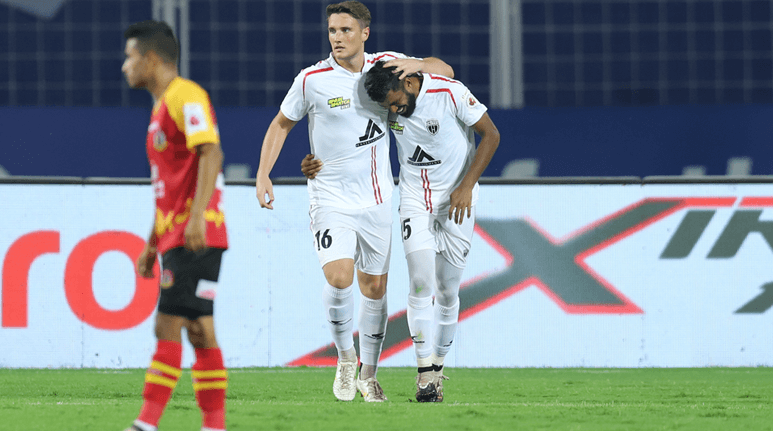 23 February 2021 | NorthEast United Media
A VP Suhair opener followed by a Sarthak Golui own goal helped the Highlanders secure all 3 points against East Bengal. With 30 points secured for the first time in history, the club now needs a point from their final fixture on Friday, the 26th of February to ensure a place in this year’s playoff spot.
With the urgency and the initiative to grab all 3 points, Coach Khalid named a strong XI for the game. Federico Gallego however could only make it to the bench, having not fully healed from a niggle. The boys started the game brightly looking to catch the opponents off surprise, but the East Bengal defence was on par with every attack the highlanders were able to mount on their goal. As the half wore on, the East Bengal attack strung together a few forays on our goal as well but there was no major threat. The teams went in to the break with no goals scored on either end. This score line would be inconsequential for our opponents on the night, but could be potentially catastrophic for thr Highlanders.
Probably feeling the pressure of the scenario, the Highlanders began the 2nd half with even more urgency and soon enough, VP Suhair, who looked dangerous all night found the net from an Imran Khan ball which deflected off an opposition defender to fall kindly on his feet. You could almost feel a huge sigh of relief set in on the Highlanders bench and the pitch as the passes suddenly began to flow at a far easier rate than before. A few minutes later, Nim Dorjee's dangerous cross was swatted into the net by East Bengal defender Sarthak Golui, giving the Highlanders a massive advantage going into the final 30 minutes of the game. To shore things up in the midfield, Coach Khalid brought on Fanai in place of Imran Khan, and the Mizo duo of Fanai and Apuia combined with Khassa, worked overtime with the defence to ensure the lead was intact. Although East Bengal got one back in the dying minutes of regulation time from a set piece via a Sarthak Golui header, the Highlanders navigated the final few minutes expertly to secure the 3 points and take control of the playoff race.
For his standout performance on the day, Suhair took home the Hero of the Match Award. The Highlanders will now face Kerala Blasters on the final day where a point will ensure a playoff spot for the Highlanders for only the second time in history.