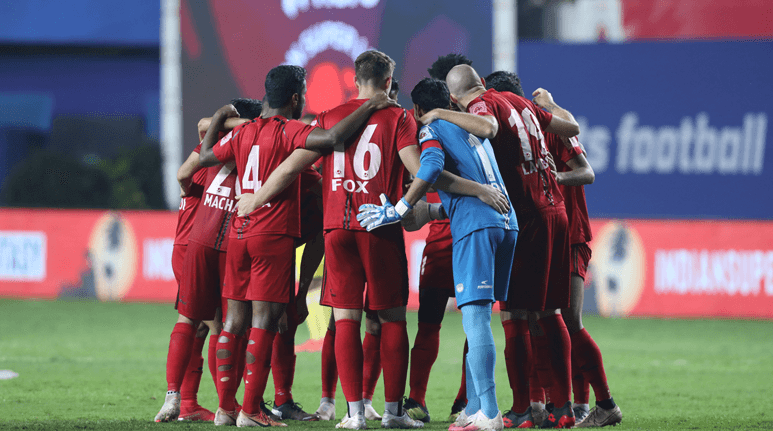 07 February 2021 | NorthEast United Media
Missing key personnel due to injuries and suspensions and just 2 days in between the previous clash, the Highlanders dug deep to come out of a tough night at the Tilak Maidan with a point that was enough to take them to 4th on the league table!
With as many as 6 changes to the starting line-up, the Highlanders had the odds stacked against them right from the start facing a Hyderabad side who are on an unbeaten run themselves. However, at no stage of the game did the Nizams have the upper hand as a defensive masterclass from the defenders and the midfield duo of Rempuia and Apuia Ralte worked in tandem to break down the attacking threat the opposition posed. On the attacking side of things, Gallego and Machado looked as threatening as ever but chances were at a premium throughout the game.
With the half ending at 0-0, and the scores tied 20 minutes into the 2nd half, Coach Khalid introduced VP Suhair and Deshorn Brown for the final 20 odd minutes of the game. The inform striker, Deshorn Brown, showed immense character, coming on with 3 stitches on his feet and showing no signs of the obvious discomfort he had to endure. With 5 minutes left, Benjamin Lambot almost headed home from close range from Federico Gallego’s free kick, but his effort just shaved the bar on the way out. Luis Machado was sent through by Gallego in the final minute of the game but the ball just about eluded him in front of goal as keeper Kattimani lunged forward to make a crucial interception.
Both sides took home a point and now occupy 3rd and 4th places in the table. Apuia Ralte was adjudged the Hero of the Match for yet another stunning display, another one well beyond his years. This is the youngster’s 3rd Player of the Match performance this season.
The Highlanders will now have a week to catch a break before squaring off against Odisha FC on the 14th of February.