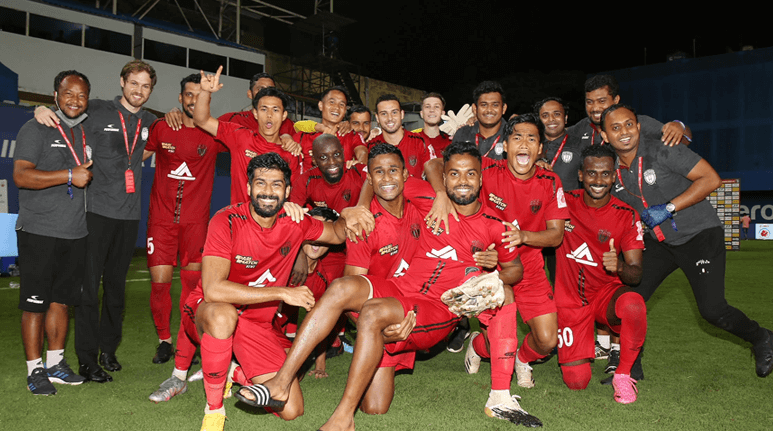 26 February 2021 | NorthEast United Media
First half goals from VP Suhair and Apuia Ralte were enough to see the Blasters off, as the Highlanders qualified to the playoffs for the 2nd time in history.
Needing just a draw to make the top 4, the Highlanders would be forgiven for taking a cautious approach to the game but Coach Khalid named an unchanged XI showing his intent to win this one and not settle for the draw. Although the Highlanders started brightly, the Blasters grew into the game, troubling the defence on ocassion. Post the drinks break, though the Highlanders took control via VP Suhair's 2nd goal in as many games. 10 minutes later, Apuia smashed one in from 40 yards to double the lead and grab his first ever goal for the club.
Having taken a big advantage into the dressing room, the boys came out in the second half looking to manage the game and complete the job on the night. At the 60 minute mark, Coach Khalid rang in the changes bringing on the recovering Gallego for some much needed game time. The midfielder looked sharp in the time he spent on the pitch. Deshorn almost tripled the lead for the Highlanders late in the game but his shot was denied by the bar. The Highlanders held on to protect the lead and earn all 3 points which confirmed the much coveted playoff spot.
Apuia Ralte was voted the Man of the Match. Speaking to the media after the match, Coach Khalid credited the players and staff for the achievement whilst showering praises on Suhair and Apuia.
The Highlanders will now have to wait for the results on the final matchday to find out their opponents for the semi-finals.