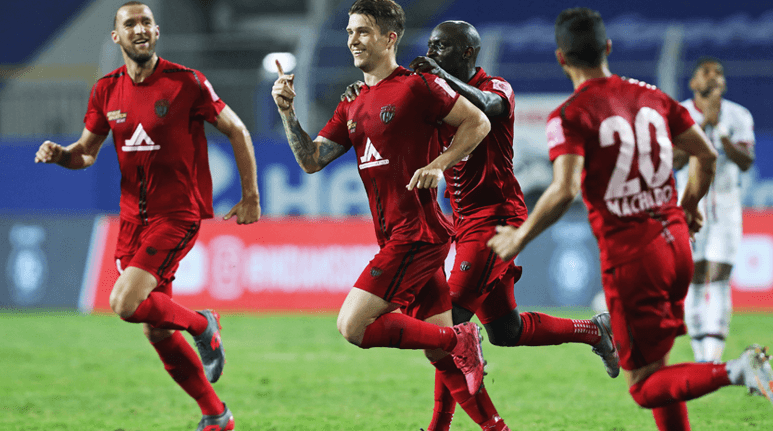 26 January 2021 | NorthEast United Media
Another man of the match performance from Federico Gallego, ending with him scoring the winner on the 81st minute, marked a memorable win for the Highlanders in the 7th edition of the Hero ISL.
Forced into a big change in the defensive half, with in form full back, Ashutosh Mehta missing out due to an injury, Coach Khalid gave defender Nim Dorjee and striker Deshorn Brown their first starts, this season. The rest of the team remained unchanged as Coach Khalid opted not to tinker much with the side which ended winners last time round. Both sides began the first half looking to sieze the early initiative with Federico Gallego and Luis Machado looking dangerous on the ball. The Highlanders finished the half with more shots on goal, but the score remained 0-0 at the break.
The Highlanders began the 2nd half with more purpose and soon, Luis Machado slotted passed Arindam after being played through by Federico Gallego to give the Highlanders a crucial lead. Soon after, Benjamin Lambot replaced Fox in defence as the Australian looked to be in a spot of bother after delivering yet another tireless performance. In the 72nd minute, Bagan found the equalizer via Roy Krishna who tapped in from close range, setting up a tense finish. Coach Khalid was quick to introduce the fresh legs as Idrissa Sylla and Charra were brought into the mix replacing Brown and Suhair up front. Both of them combined in the 81st, with Charra finding Gallego on the edge of the box, who fired one from 25 yards to snatch a crucial lead for the Highlanders. The boys saw out the rest of regulation and added time to register a crucial 3 points and keep pace with the top 4 sides in the quest for a place in the playoff spot.
Speaking to the media after the match, Coach Khalid credited the win to the players and the rest of the staff who according to him have been working really hard behind the scenes.
The Highlanders will next face table toppers, Mumbai City FC on the 30th of January.