A Tough Defeat to Swallow for The Highlanders Against Jamshedpur FC 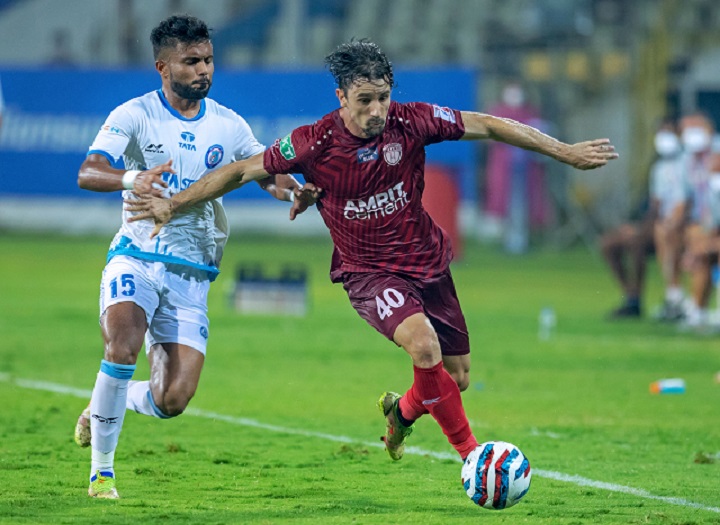 27 Sunday 2022
NorthEast United faced another tough defeat in the final home game of the season against Jamshedpur FC. The match ended 2-3 in favour of the visitors at the PJN Stadium in Fatorda. Len Doungel opened the scoring for the visitors at the 35th minute and Greg Stewart doubled it at the 59th minute. But the Highlanders scored two back to back goals from Laldanmawia and Marcelinho but it was Jordan Murray’s goal at the end which turned out to be the winning goal for Jamshedpur FC. Three changes were made by Khalid Jamil going into the game as Gurjinder came back into the starting eleven after serving his suspension and replaced Lakra at left-back. Australian Patrick Flottmann made way for Mashoor Shereef and Suhair was replaced by Austrian Marco Sahanek upfront. Jamshedpur started the game in an attacking manner and won a corner in the first minute itself, but it was well defended by the Highlanders’ defence. A couple of minutes later, it was the hosts who had a chance on the other end as Gurjinder’s cross was headed well by Imran only to see his effort go wide of the post. After both sides shared possession for the following minutes, it was at the 23rd minute when the Highlanders were able to register a shot on goal. All 3 of the midfielders played some quick passes to finally find Sahanek just outside the box but his shot didn’t have enough power to trouble the opposition keeper. The visitors kept pressing looking for the goal after the water break and got rewarded at the 35th minute of the game. Mobasir Rahman’s cross from the left was headed past Mirshad by Len Doungel to give the visitors the lead of the game. The following minutes of the half saw NorthEast press relentlessly in search of the equaliser but as the referee blew his whistle for half-time it was the visitors who went into the dressing room with a lead of 0-1. Two changes were made for the Highlanders at the beginning of the second half as Marco Sahanek made way for Brazilian Marcelinho and Laldanmawia Ralte was brought on to replace Mohamed Irshad. And despite the Highlanders putting on a better show in the second half, it was the visitors who were able to double their lead at the 59th minute of the game. Greg Stewart found himself one on one with the keeper coming from the right flank and he was able to lob it past the keeper to make it 0-2 for Jamshedpur FC. Being down by two goals, the Highlanders struck back pretty soon. It was at the 66th minute when Imran Khan found Marcelinho with ample amount of space for the latter to take on the keeper from the distance. The Brazilian’s effort wasn’t dealt well by the opposition keeper and it felt perfectly for Danmawia to put it in the back of the net and bring NorthEast back in the game. And just a minute later, Marcelinho equalised netting his first-ever goal for NorthEast United. Midfielder Pragyan Gogoi fed in a perfect defence-splitting through ball to the Brazilian who went past the keeper with ease before slotting the ball into the open net. Both the teams then kept pushing each other to the limit in search of the winning goal which eventually came late at the 84th minute of the game and it was Jamshedpur FC who were able to take the vital lead. Greg Stewart fed in a perfect lobbed delivery which was then acrobatically put into the back of the net by Jordan Murray to make it 2-3 for the visitors. The referee then added 5 additional minutes at the end of regulation time and despite the Highlanders giving their all, they came short when the referee blew his whistle for full-time. NorthEast United FC will now face SC East Bengal in their final game of the season on the 28th of February at the TIlak Maidan Stadium.