NorthEast United registers a comeback win against the Blues 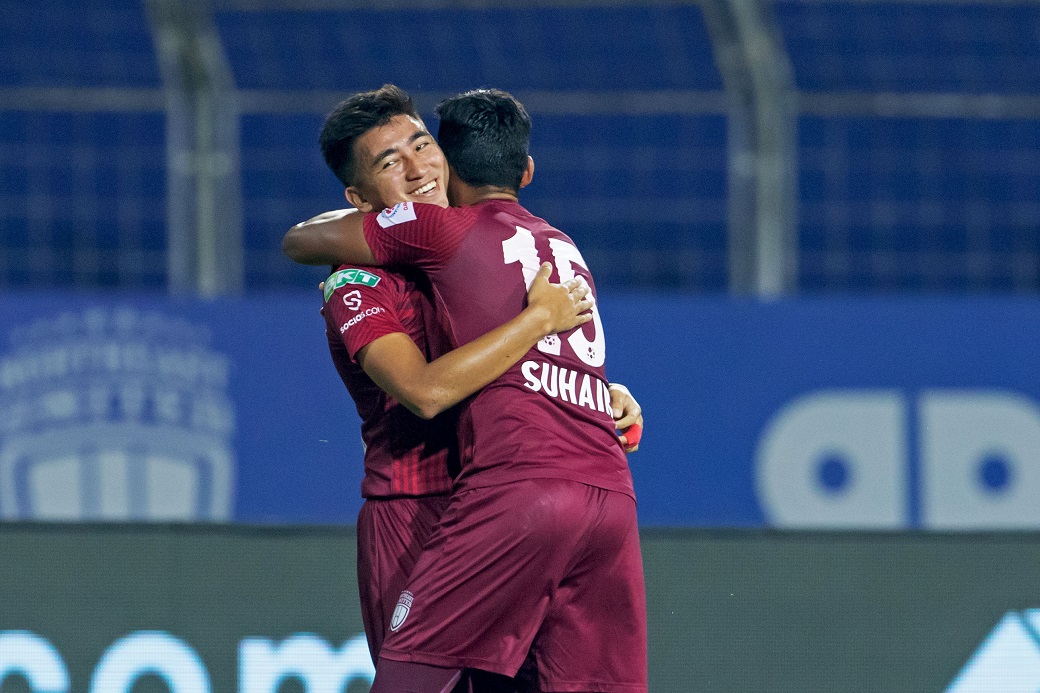 25 Friday 2022
NorthEast United secured a comeback win to move out of the bottom of the table as they defeated Bengaluru FC 2-1 in the Hero Indian Super League match 94. The match was held at the PJN Stadium at Fatorda. Cleiton Silva opened the scoring for Bengaluru at the 66th minute but Deshorn Brown’s 74th-minute header equalised for the Highlanders before Laldanmawia Ralte netted home the winner at the 80th minute. Khalid Jamil made a few changes to his starting lineup; Mirshad returned in goal to replace Subhasish and Lakra came in to replace Gurjinder who was serving a suspension. Marco Sahanek and Marcelinho made way for Deshorn Brown and Patrick Flottmann as Imran made his way into the starting eleven replacing Mashoor. The visitors started the proceedings from kick-off and were on the attack as right at the 2nd minute they won a corner off a block from Patrick but the resultant effort from the corner was dealt well by keeper Mirshad who was making a comeback. It was the visitors who were all on the attack, dominating the play after the first quarter of the game but they weren’t able to cause any trouble at Mirshad’s goal. NorthEast United had their first chance of the game from a corner won by Joe at the 16th minute, but Imran’s delivery was well cleared by Bengaluru’s defence. The Highlanders had a free-kick a minute later, Hernan’s delivery to the box was flicked on by Suhair but his effort went wide of Lara’’s goal. It was at the 22nd minute when the hosts had the first clear chance on goal as Joe on the right-wing had plenty of space to feed in an inch-perfect cross for Imran to head home but the latter’s effort went wide. Just a minute later, it was Deshorn Brown who had his shot denied by the crossbar to keep the score goalless. NorthEast were able to keep taking advantage down the right-wing and had another shot at goal; Hernan’s effort took a deflection before Lara fisted the Spaniard’s shot out for a corner. Mirshad was called into action right after the drinks break as Cleiton’s shot bounced awkwardly right in front of the keeper who was able to hold on to it in the second attempt. Though both teams shared possession in the remaining minutes of the half, but it was the visitors who had a chance from a corner right at the end of the additional 3 minutes, but they weren’t able to capitalise on the chance and the scoreline remained goalless at the end of the first half. As the Highlanders started the second half, the hosts had a great chance to open the scoring from Hernan’s free-kick, which just brushed off Suhair before a fully stretched Lara parried the ball out to safety. Moments later, Bengaluru countered from the left and a perfect through ball fell perfectly for Sunil Chhetri but Mirshad’s heroic save didn’t let the visitors break the dreadlock. Coach Khalid Jamil made the first change at the 61st minute when Danmawia was brought on to replace Mohamed Irshad. And straight away the hosts had a chance, Danmawia picked up the ball from midfield and found Imran down the right-wing, who then fed a through ball into the feet of Suhair but was blocked by the defender. After relentless pressing, it was the visitors who opened the scoring at the 66th minute through Brazilian Cleiton Silva. To come back into the game, NorthEast then made 3 changes; Pragyan, Patrick and Lakra made way for Jestin, Marelinho and Tondonba. And just a few minutes later, the Highlanders were able to equalise and get back in the game through Deshorn Brown. It was right back Joe who found himself with ample space to feed in a perfect cross for the Jamaican forward to find the corner of the net with a perfect header. The game was evenly poised with a quarter of an hour left to play in the regulation time. At the 80th minute of the game, the Highlanders were able to finally take the lead as two substitutes combined to find the back of the net. It was Brazilian Marcelinho who eased past two defenders before taking his shot which got deflected by the visitors’ keeper but the fox in the box Danmawia was there to tap it into the back of the net. Though the Blues tried on plenty of occasions to get back into the game but the resilient Highlanders defence were able to hang on to the lead till the final whistle to secure the win. The Highlanders will now host Jamshedpur FC at the PJN Stadium, Fatorda on Friday, 25th February.