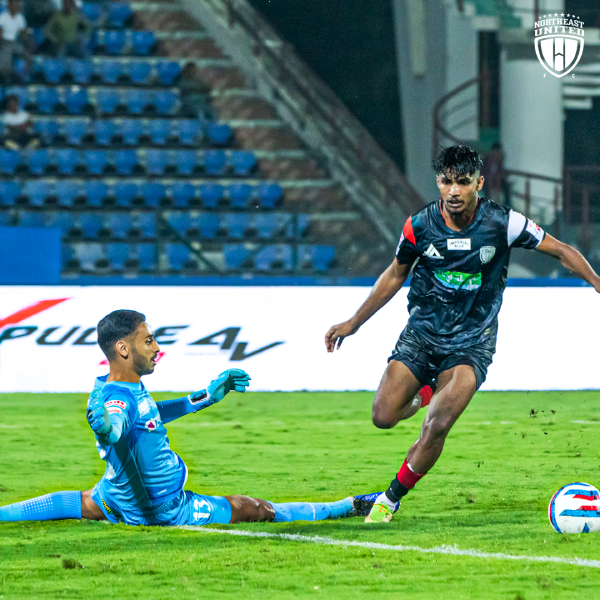 19 Saturday 2022
Even after creating a handful of chances on its own, Northeast United FC suffered from a hard luck 0-3 defeat against Kerala Blasters FC at the Indira Gandhi Athletic Stadium in Guwahati on 5th November, 2022. Dimitrios Diamantakos 56th minute goal and Sahal Samad 86th and 90+6th doubles sealed the victory for the Kerala Blasters. Ivan Vukomanović made five changes to the Kerala Blasters line-up, with three changes in defence. NorthEast United FC stuck with the 5-3-2 formation for the second game straight. The game started slowly with neither side willing to risk anything, cancelling each other out in midfield, and struggling to carve out chances in the final third. Romain Philippoteaux hit the woodwork from range after a little run from midfield in the eighth minute for NorthEast United FC, and Diamantakos found some space in behind in the 40th minute for Kerala Blasters, but his shot went wide. The two goalkeepers weren’t asked to make any saves either as the first half ended 0-0. The coaches did not make any changes heading into the second half, but the two teams showed more directness by taking a few shots early in the half. The plan paid off for Kerala Blasters in the 56th minute. Saurav Mandal was played through by Rahul KP, and Mandal’s shot was met by Diamantakos, who added the finishing touch to an excellent team move. NorthEast United FC came extremely close to equalising twice in the space of two minutes. The first chance fell to Imran Khan, who got on the end of a brilliant cross, but could not get the right connection. Emil Benny got on the end of an even better chance a minute later after being played through by Matt Derbyshire. Despite rounding off the goalkeeper, Benny’s touch was too heavy, and ultimately not even resulting in a shot. NorthEast United FC were punished two minutes later by Sahal Samad, who finished off a rapid counterattack to give Kerala Blasters a 2-0 lead. The substitute added another goal six minutes into second-half stoppage time to give his side a 3-0 victory. The Highlanders did create chances on its own, but was wasteful in front of the goal. Emil Benny’s miss, just before Sahal scored the second goal, might be the biggest one.