Highlanders go down by a narrow margin against Jamshedpur 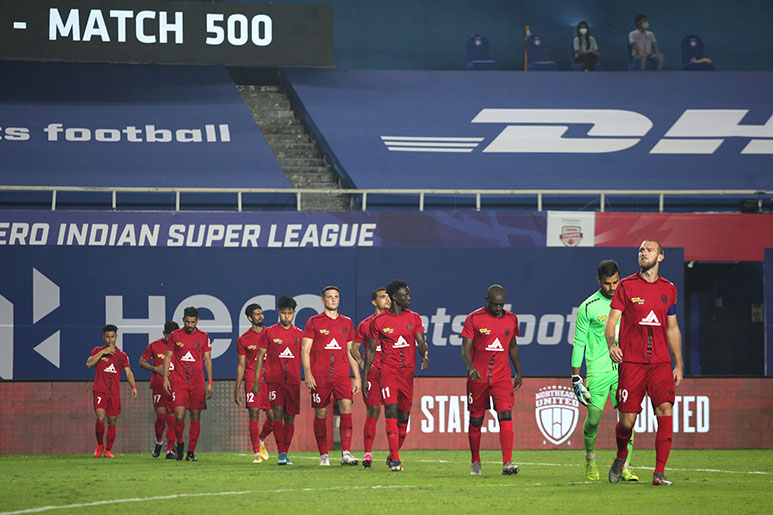 18th December 2020 | NorthEast United Media
The Highlanders suffered their first loss of the season after an Aniket Jadhav goal gave Jamshedpur FC the lead early in the second half and Idrissa Sylla’s penalty was saved by TP Rehenesh.
The first half began with cautious approaches from both the teams with both defences on top and chances being created at a premium. Coach Gerard started both strikers Appiah and Sylla for the second time this season going with Ninthoi and Charra as the wide players. The striking duo did combine to make a few early inroads but 50-50 offside calls and fluffed half chances meant that the scoreboard wasn’t disturbed in the first half.
The second half began with the visitors seizing the initiative through the early goal and Coach Gerard immediately brought in Machado to address the situation. The Portuguese winger once again showed shades of brilliance and soon the Highlanders had earned a penalty after Benjamin Lambot was brought down in the box. Unfortunately, Idrissa Sylla’s penalty was saved and there was no getting back on the night. Late subs VP Suhair and Federico Gallego did not have much of a say in the time they had but the Highlanders will take that as a positive that Gallego had some minutes in the pitch after an injury ruled him out for the last 4 weeks.
The Highlanders will next take on Odisha FC on Tuesday and will aim for all 3 points to arrest the dip in momentum.